Scissors can be a bit dangerous to pack on for a flight. Some of you may be wondering if having scissors on board can be safe or not?

As scissors can be damaging because they have sharpened blades joint at the pivot, there are some regulatory guidelines for these to be on board.

TSA has been quite precise about the type of scissors that you can bring on board. So now let us clear the notion of yours regarding how can you bring scissors on a plane.

TSA Guidelines for Taking Scissors on a plane

TSA is a regulatory authority that regulates all the safety checks for your safer air travel. They have done every possible step and clarification that might help you with your packing and your risk-free trip on board.

Can you bring Scissors on a plane?

As mentioned above earlier, the TSA Regulation authority has been quite clear about bringing the scissors on board. It’s a yes from their side as far as it fulfills the safety requirements.

Scissors of any size and shape can be packed into your checked baggage irrespective of the quantity. For the carry-on, TSA does provide some safety tips to ensure damage-free travel.

The section below provides you with a detailed overview of how and how much can you bring scissors on a plane.

Can you bring scissors in checked baggage?

According to the TSA Regulations, YES you can bring hair cutting scissors on a plane in your checked baggage. There is no limit to its quantity as long as you do not overweigh your luggage. You can also keep the scissors packed or open in your bag.

To cut things short and straight,  let us give you the categories of scissors that you can easily take along in your checked baggage.

Like all of you one user from Twitter wants to know if he can take along the veterinarian scissors along in his checked baggage. Well here is what TSA has to say: 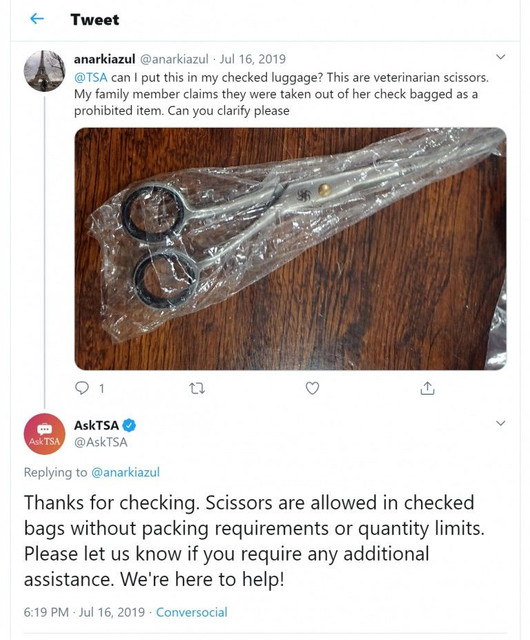 One of the Twitter users Melissa asked if she could bring the hair cutting scissors on board. This was what she was answered: 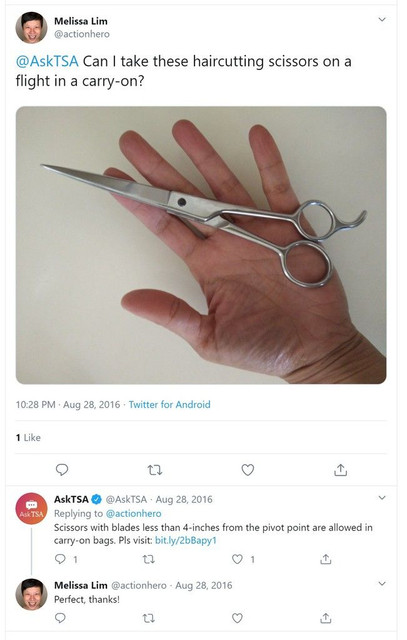 Can you bring scissors in hand-carry baggage?

YES, you can take scissors on board in your hand-carry baggage but with certain limitations. You can bring the safety scissors with blades of  3 to 4 cm in length just after the pivot. Scissors with longer blades would be allowed under certain specifications only.

Depending upon the different types of scissors with different blade lengths,  here were some categories out forward to TSA.

Let us head towards some of the asker questions:

Another user asked about the small thread cutting scissors in her carry on baggage and here is what TSA has to say about it: 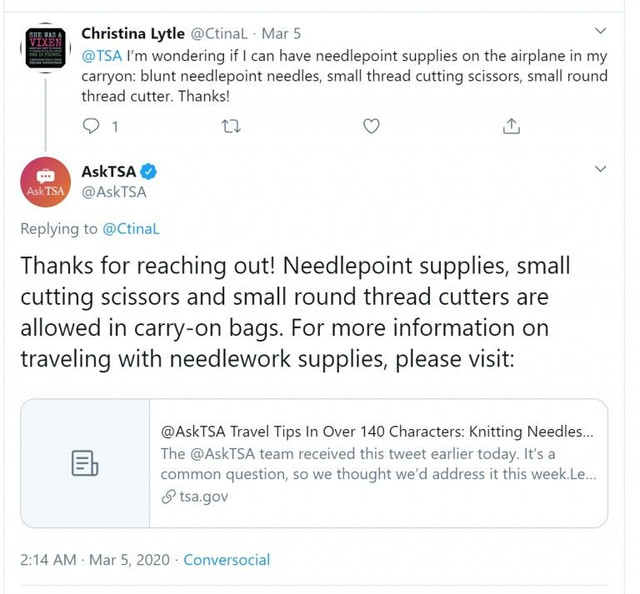 The question and queries increase with the abundance of variety we have in scissors. A Twitter user, Bernie wanted to ask if he could have his multi-tool kit with schools along in his carry-on luggage.

This is what he has been answered: The possibility of going on a flight with medical scissors in his carry baggage must have made Bran happy.

Before hopping onto the flight he asked about the permission for his medical scissors in his carry-on baggage and this is what TSA has replied. As there are no specific pick-in scissors from TSA to be carried in the flight, there another one that got popped onto the list of getting carried in the carry-on is the Safety Scissors.

The user must have been relieved after the allowance of taking safety scissors to flight on carry-on. 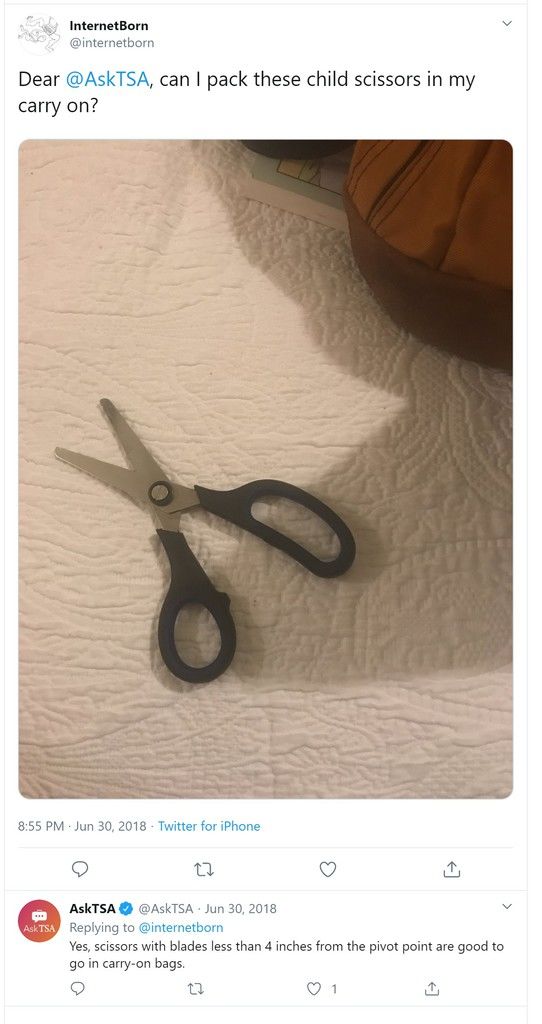 Where to pack your scissors when flying?

Packing the scissors can be challenging. You need to be careful that its blades are properly covered or not to ensure no damage. The best tip to pack scissors is to use scissors Sheaths or holders use for packing sharp objects. If you are taking multiple scissors then holder bags are recommended.

For ladies, it’s better to pack scissors in a makeup bag rather than handling a separate bag for it. Security officers will surely not question you or get harmed during the inspection.

For traveling, scissors have to be small, sharp, and comfortable enough to pack. Here we shortlist some best scissors for travel you can have a check.

A final checklist you need to check before you Hop onto the plane?

For your quick help and reminder, I have put together the final checklist you can check just before you hop onto a plane.

Also, Read
Can you take rocks on a plane?

In the above context of the can you bring scissors on a plane, seems to be summing up at the length on the blade. Here the thing that has to be managed and seen is the blade length.

If it exceeds the limit given by the TSA your scissors have to go to the checked baggage. If it’s below the range, you can have your travel essentials in your Carry on.

Travelandtea.com is honorary platform making your travelling and packing fun and easy. From travelling tip to packing ideally we have got you covered.